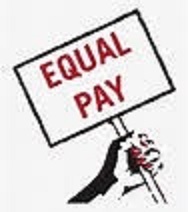 AAUW advocates for strong pay equity legislation, regulation and enforcement in the US to help women achieve their full potential.

“That’s not fair!” I can hear my brother exclaim to my parents during a sibling dispute. On March 15, we should all shout “that’s not fair” that, overall, women working full time in the U.S. make 83% of what men earn.

Equal Pay Day is the symbolic day dedicated to raising awareness of the gender pay gap. It represents how far into the next year (83 days) the average woman must work in order to earn what the average man earns in the previous year. Women working full time are paid an average of 83 cents for every dollar paid to a man. Women of color face an even wider pay gap: In 2019 Black women earned 63 cents for every dollar paid to white men and Latinas were paid only 55 cents. The gender pay gap exists for every race, age group, educational level, and profession.

The California overall wage gap at 88 cents is better than the national average. However, Santa Clara County is worse; in our county women made only 71 cents — the widest pay gap in the Bay Area—according to a pre-Covid-19 analysis by the California Budget & Policy Center.

Women in the workforce have been disproportionately impacted in the short-term economic fallout of COVID-19, especially lower income workers.

Since the Equal Pay Act was signed in 1963 (enacted to prohibit gender pay discrimination), the wage gap has narrowed, but progress has stalled. In 1963 women who worked full time made 59 cents on average for every dollar earned by men. Now at the current rate of change, women won’t achieve full pay equality until 2059.

Gender pay equity has been a longtime priority issue for AAUW. It worked for the passage of the Lilly Ledbetter Fair Pay Act of 2009, which makes it easier for workers to seek redress for discrimination on the job. It supported amendments that strengthened the California Equal Pay Act in 2015. It successfully lobbied for the 2016 bill that prevents California employers from using prior salary to determine an employee’s compensation.

AAUW continues to advocate for the passage of The Paycheck Fairness Act, which would update and toughen the 1963 Equal Pay Act. It passed the House of Representatives last year but has stalled in the Senate. You can help by contacting your members of Congress and urging them to approve this legislation.

AAUW is also committed to educational programs like “Work Smart” that focuses on negotiating for a new job, raise or promotion. “Start Smart” teaches salary bargaining skills to college women.

So, let’s take action to help our daughters, grand-daughters, and all their friends reach pay equity!

A version of this article appeared in the March 24, 2021, issue of Morgan Hill Life. It has been edited and updated to include the most recent data available.