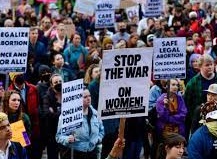 The Married Women’s Property Act of 1848 was the most expansive legislation of any enacted and allowed a married woman to enter into certain contracts, write a will and sue for divorce. In 1920, the 19th Amendment of the U.S. Constitution granted American women the right to vote, although Native American, Asian American, Latina and African American women were not included. In 1971, the US Supreme Court ruled that the Constitution of the US conferred the right to have an abortion. This journey for women’s fight for equity ended on June 24, 2022, when the Supreme Court held that the Constitution does not confer a right to abortion and overruled Roe v. Wade. It returned the authority to regulate abortion to the states.

On a Tuesday evening in July, 25 women and men from four generations came together to share their thoughts, concerns and frustrations about this ruling from the Supreme Court. They shared their personal experiences of choices they could or could not make  before or after Roe was the law. They talked about their concerns for women who will not be able to control their futures and/or their ability to achieve economic independence. It was recognized that women in marginalized demographics would be most severely impacted by this ruling.

In California the current law states that the “state may not deny or interfere with a woman’s right to choose or obtain an abortion prior to viability of the fetus, or when the abortion is necessary to protect the life or health of the woman.” But the general feeling was “how can we help the women in other states?” In a webinar presented by AAUW CA, the question was answered with two actions. First, get out the vote. Voters will have a state constitutional amendment on reproductive freedom on the ballot. Second, donate to organizations working on supporting women’s health e.g. Planned Parenthood.